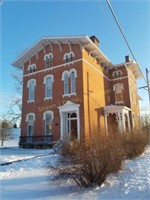 Online only Auction of real estate will close on 03/19/2019 beginning @ 2:00 pm EST
Welcome to the historic Albert Lawrence1857 Home real estate auction. Here is a rare opportunity to bid on, and own a mansion from the past. A stately Federal Brick, 3 story home, possible 22 rooms, that, for the last 27 years has had the first 2 stories mostly renovated, and waiting for the next owner to put their touches on it. Historically was a home, the Colonial Inn, a musem, and a Nursing home. Bidder Packet Link- https://documentcloud.adobe.com/link/track?uri=urn%3Aaaid%3Ascds%3AUS%3Ab257fd52-4312-4fce-8522-9cb701acd4e6 What a wonderful home for the professional that wants to make a statement, as this also has separate brick structure that serves as an office space with office, reception area and restroom. Would make an excellent Bed and Breakfast as it is convenient to Salt Fork, Seneca Lake, Amish Country, Roscoe Village, Marietta, Glass and Pottery country, Columbus Pittsburgh and more. The village of Old Washington was founded in 1805 and has been know as Beymerstown, Washington, and New Washington. Samuel Lawrence was a prominent businessman who moved to the village in 1814. His three sons, William, John and Albert worked for their father and became successful businessmen as well. The three Lawrence brothers planned their expensive brick homes in the village in the mid-1850’s. John Lawrence built the smallest of the three beside his boot and shoe business near the center of town. William Lawrence built his larger brick home further east on Main Street. William was the oldest of the three brothers, and was an elected representative in the Ohio General Assembly. He served in the United States Congress as well, and practiced law after his political career ended. Albert Lawrence built the largest of the three homes at the corner of Main Street and what is now State Route 285. The three story brick has a grand entrance with ornate plaster on the ceiling and a freestanding curved stairway. The ornate plaster ceiling is also found in the formal parlor. The original cost of the home is reported to have been $37,000.00. The Civil War In July 1863, six years after the Albert Lawrence home was built, General John Hunt Morgan and his Confederate “Morgan’s Raiders” invaded the town of Washington. General Shackelford of the Union Army had been pursuing the Raiders, and there was a brief skirmish in which three Confederate soldiers lost their lives. They are buried in the cemetery located south east of the Albert Lawrence home. The 1920’s Fred and Beulah Lowry established the Colonial Inn in this grand home in 1921. The National Road brought many travelers through Guernsey County, many of whom stayed at the Colonial Inn. The establishment was also a favorite place for the local residents to spend Sunday afternoons enjoying the famous fried chicken dinners. The 1960’s The dwelling became the Hitchcock Nursing Home in 1958, and was utilized as the Colonial Inn Museum for a short time in the 1970’s. This is an online only auction, subject to owner confirmation and pre auction offer. Property is described as best we can, however is sold as is where is, with no contingencies. 11% buyers Premium applies, added to the final bid price to create the contract sales price. 10% non refundable deposit within 36 hours of auction end required, via certified funds, cash, or wire transfer. An invoice will be provided to you. Closing will be within 45 days of Auction Close. Preview will be Sunday February 24, 2019 from 1pm- 4pm. An additional preview will be on March 12, 2019 from 3pm-6pm. The team of Shawn J Dostie, Auctioneer/Agent, CAI Ben Schafer Realty, Ed and Ben Schafer Auctioneers, OnlineAuctionUSA.hibid.com thank you for your participation, and wish you the best of luck.
Bidding Notice: Use max bid or flashing catalog
Location
Old Washington, OH
Details
Auction Details
Catalog
View Catalog (1 Lot)
Single Page

No bids found for this item

In the case of a tie bid, precedence is given to the earliest bid

Your Max Your Bid

Your Max Your Bid

Your Max Your Bid
Click to add notes.
Notes saved

Get a Shipping Quote
Shipping

Email Privacy Policy We have created this email privacy policy to demonstrate our firm commitment to your privacy and the protection of your information. Why did you receive an email from us? If you received a mailing from us, (a) your email address is either listed with us as someone who has expressly shared this address for the purpose of receiving information in the future ("opt-in"), or (b) you have registered or purchased or otherwise have an existing relationship with us. We respect your time and attention by controlling the frequency of our mailings. How we protect your privacy We use security measures to protect against the loss, misuse and alteration of data used by our system. Sharing and Usage We will never share, sell, or rent individual personal information with anyone without your advance permission or unless ordered by a court of law. Information submitted to us is only available to employees managing this information for purposes of contacting you or sending you emails based on your request for information and to contracted service providers for purposes of providing services relating to our communications with you.

The email address {0} has been subscribed to the email list.

Oops, there was a problem.

I was unable to add your email address to the email list. Please check your address and try again.

Oops, there was a problem.